A mighty oak awakens from an acorn 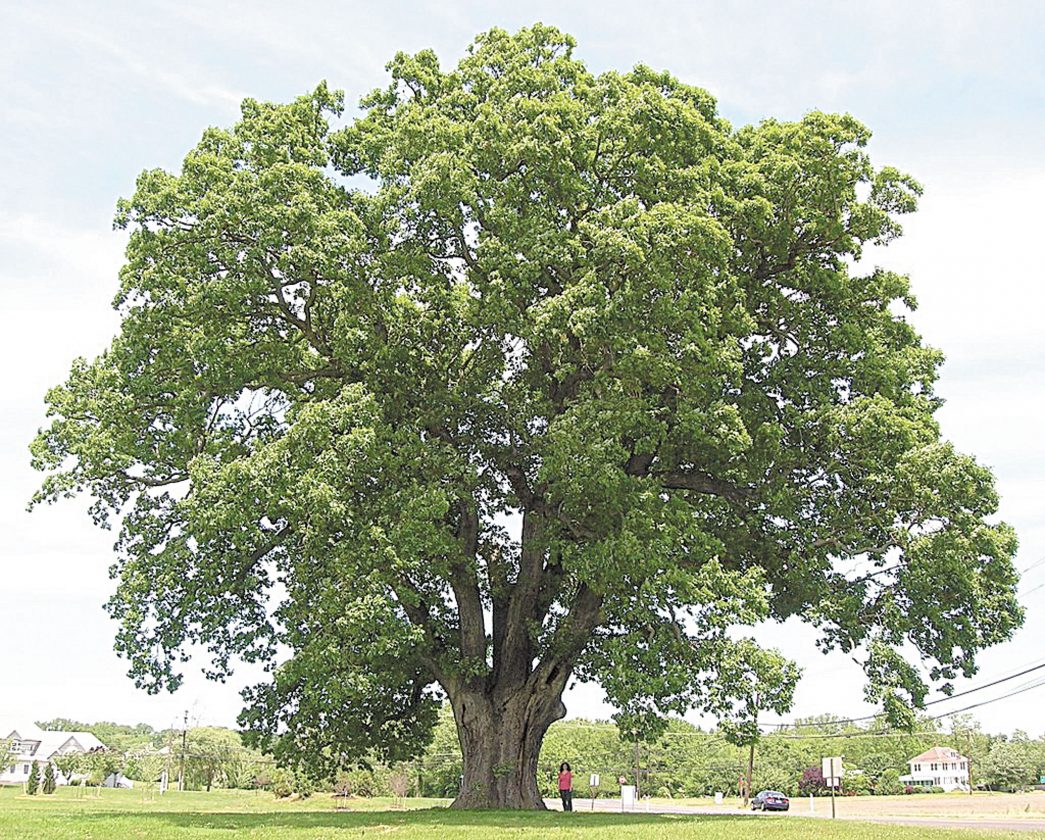 There’s a fine ball field on the north side of the red brick armory housing the Ohio Army National Guard’s Charlie Company, 1st Battalion, 148th Infantry Regiment on Riverside Drive in Tiffin. Driving past with the windows down on a late spring afternoon, you might catch the ping of the bat and the shouts of girls as a softball rifles past third.

Watching the game from just beyond the left field fence is a magnificent white oak. Without any neighboring trees to hem in its growth, its crown has spread wide in all directions. In November, I paced out 40 steps from one side of its canopy to the other; beneath my feet a carpet of 10,000 browning leaves.

Using the ole’ tree-hugging method, I estimated a circumference of about 16 feet. I’m a lousy judge of height, but it must be up around 70 feet, plus or minus. Even in March, with bare, trunk-thick limbs reaching out all crooked and akimbo, she is beautiful in her grace, power and age.

In November 2004, following a nationwide poll sponsored by the Arbor Day Foundation, the U.S. Congress passed legislation designating “the oak” as America’s national tree. (In this, we joined England, Bulgaria, Germany, France, Jordan, Serbia and eight other countries.) Bit of a problem for sticklers, perhaps, as there are some 600 different species of oaks, 90 of which occur in the U.S. But that’s just being picky.

The great majority of North American oak species can be divided into either the red oak or white oak group. As typified by the very common red oak species (Quercus rubra), leaves of species in the red oak group will generally have pointed lobes tipped with a bristle, while leaves of those in the white oak group (as typified by Quercus alba, the white oak) have rounded lobes, sans bristle.

Although the white’s bark is a lighter shade than that of the red, their names are more about the color of their wood. Red oak heartwood is orange or reddish while that of white oaks is more of a cream or tan.

Because the government hasn’t said otherwise, I figure we get to choose which particular oak we want to revere. I’m going with Quercus alba, and I’m not alone. Donald Peattie was one of the most widely read naturalists in the mid-20th century. Here’s a taste of his style from his “Natural History of North American Trees:”

“If oak is the King of Trees, as tradition has it, then the Eastern White Oak, throughout its range, is the King of Kings. The Tuliptree can grow taller, and the Sycamore in the days of the virgin forest had gigantic boles, but no other tree in our sylva has as great a spread. The mighty branches, themselves often 50 feet long or more, leave the trunk nearly at right angles and extend their arms benignantly about the generations of men who pass beneath them.”

Michael Dirr, author of the most widely adopted reference text of horticulture and landscape architecture, has simply said, “White oak is the standard by which all other oaks are measured.”

Not only lovely, but strong and durable, when George Washington signed the Naval Act of 1794 calling for the building of the U.S.S. Constitution, it was to be constructed of white oak. It remains today the oldest commissioned ship still afloat in the world. As recently as World War II, white oak was still being used as keels for mine sweepers and patrol boats.

They commonly live 200-300 years and in some cases for a lot longer. The Marquis de Layfayette and General Washington are reported to have picnicked beneath a white oak in Basking Ridge, New Jersey, that finally gave in to old age just a couple of years ago.

In 1717, farmers built a church beside the tree, which was already of significant size. Eventually, a town grew up around what came to be called the “Holy Oak.” Having survived wars and natural disaster — including Hurricane Sandy in 2012 — it finally came down in April 2017 at more than 600 years of age.

Another white oak with an American story, the Charter Oak of Hartford, Connecticut, succumbed to a storm in 1856 at well over 400 years of age. Purportedly, Connecticut’s Royal Charter of 1662 was hidden in the tree to block its confiscation by the new English governor general who was trying to consolidate power for the Crown. True or not, the Charter Oak became a symbol of American independence and appears on the back of the Connecticut quarter.

White oak acorns are sweeter than those of red oaks and are preferred by wildlife from turkey and wood ducks to white-tails and gray fox. While red oak acorns take two years to mature, white oak acorns mature in one season giving them less time to accumulate bitter-tasting tannins.