Nature is full of hoarders 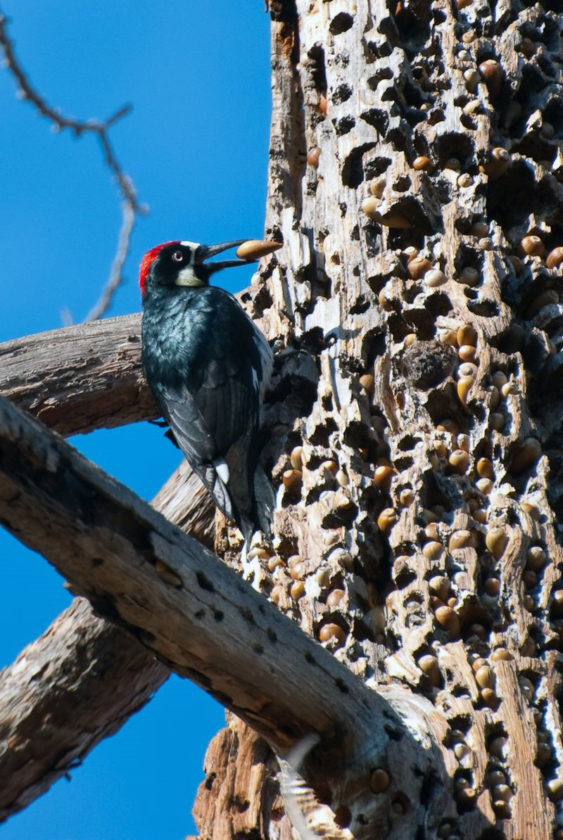 PUBLIC DOMAIN PHOTO An acorn woodpecker stores acorns in the bark of a tree, called a “granary tree.”

Over the years they seem to accumulate in odd corners of the medicine cabinet, the junk drawer, the little dish atop the dresser… The other day, out of curiosity, I collected as many as I could find around the house without working too hard. Thirteen.

How does such a thing happen? We’re nice people. But you know, the kids each leave a pair when they head off on their own, you pick up one or two cleaning out your parents’ place and you bring home a pair from the office upon retiring. They build up.

Ah, the things we collect.

I’m reminded of a mid-October walk across campus with my Field Biology class some years ago. We’d paused to watch a fox squirrel pawing up the grass with a fat acorn in her teeth. As the professor droned on about how in the fall squirrels bury small caches of food around their territories in preparation for winter, our visual example finished her digging, refilled the hole, patted it down with her forelegs and bounded off — with the acorn still in her mouth.

In an area thick with thieving competitors, it’s not enough to stock an array of food caches to get you through the winter; you also have to guard them. It’s thought squirrels sometimes prepare fake caches to throw off neighbors with too-inquisitive eyes.

Collecting and storing food for later use — hoarding — is a widespread animal behavior seen in species as different as chickadees and eastern moles. It generally takes the form of either scatter hoarding — many small caches of food stored hither and yon — or larder hoarding, with one or two large stockpiles of food typically near the nest site.

Tree squirrels use both types of caches, burying small clusters of seeds and nuts throughout their territories while also packing dozens of acorns into a tree cavity. When scatter hoarding, they commonly lick or rub acorns against their fur before burying them. It’s unclear whether this helps them relocate the cache later on. Certainly smell plays a role when there’s relatively little snow cover, but research suggests that memory is more important with a foot of snow on the ground.

White-footed and deer mice are scatter hoarders. In preparation for winter, they secrete numerous clusters of all sorts of provisions from tiny clover seeds to dried mushrooms around their woodland territories. The Eastern mole, however, stocks its pantries for the cold months in a quite different manner.

How do you store live earthworms, the mole’s preferred food? The moles’ solution is to nip off a worm’s head which immobilizes it without actually killing it. Sometimes moles store a tangle of disabled earthworms in a “knot” within an underground chamber, sometimes in above ground mounds called fortresses. (Earthworms the mole doesn’t get to by the spring can regrow their heads and crawl away.)

Red foxes (like coyotes and wolves) cache food in dense vegetation throughout the year, whenever encountering a surplus of food. Uneaten meat will be used within a couple of days while items like bones and eggs with a longer shelf life may remain untouched for several weeks.

The household dog, descendent of wolves, hasn’t lost the instinct although it may come out a bit oddly in some individuals. Growing up, our neighbors’ half-crazed Chihuahua, Mitzi, had a thing for potatoes. You’d smell something sour in the basement and find a half dozen decomposing spuds neatly tucked away within a pile of old burlap sacks.

Chickadees, nuthatches, tufted titmice and others of the winter bird-feeder crowd often will be seen probing crevices of trees near a feeder. They’re not only searching for dormant insects but also picking out seeds they’ve previously stashed under bits of bark.

But of all American birds, our champion hoarder has got to be the acorn woodpecker of oak-evergreen forests in the Southwest and Coastal California. Living in groups of a dozen or more birds, a single tree will somehow be chosen as a “granary tree.” In the fall, the whole group works madly to pack almost every square inch of its bark with acorns to sustain them through the long winter months.

Finally, a few party conversation tidbits: Alligators can bite to kill but are poor at chewing. Prey too large to swallow whole are stored underwater until they’ve decayed enough to easily tear apart. Hamsters, champion hoarders famous for storing food in expansive cheek pouches, got their name from the German word, hamstern, to hoard.

Northern and loggerhead shrikes (robin-sized songbirds with hooked bills but weak feet) prey on rodents, small birds and grasshoppers. Excess prey commonly are saved for later dining by impaling them on a thorn or barbed wire spike.

The days are growing a bit longer

Winter is still holding on so there is still time to finish a few winter chores. Dormant (but not for long) trees ...