More to fungi than meets the eye 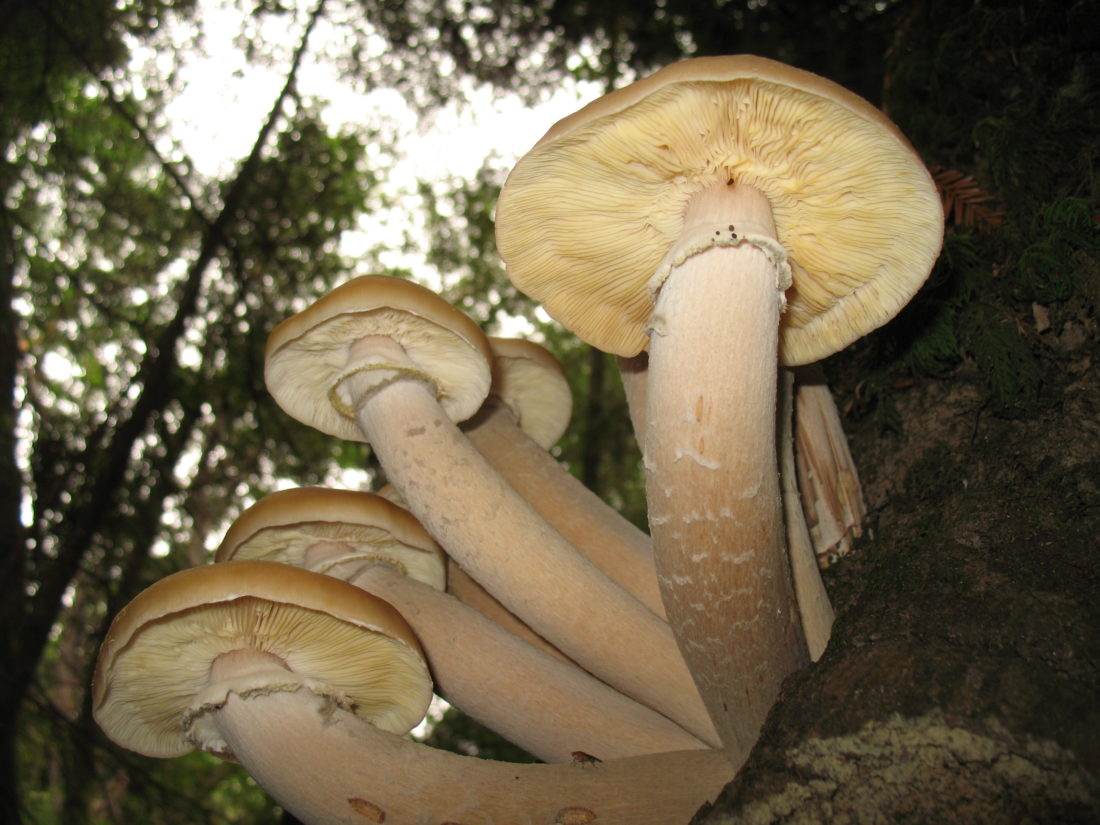 “Now of course, the fungi are much more closely related to us than they are to plants.”

Yes, for a long time biologists classified them as a weird side branch of the Plant Kingdom. After all, mushrooms grow from the ground, have a stem-like structure and reproductive stuff on top. But that’s where the similarity with plants ends. Numerous genetic and biochemical studies over the past 30 years support viewing Kingdoms Animalia and Fungi as very ancient sister groups.

You’ll recall that fungi, unlike plants but like animals, lack the photosynthetic chemistry to generate their own food (sugars and starches) from carbon dioxide and water. But while animals first ingest their food and then digest it, fungi work it the other way around.

All fungi, from the green mold growing on a forgotten loaf of rye in the back of the bread box to the four pound white truffle that sold for $62,000 in 2014, are comprised of masses of thin chains of cells called hyphae. Hyphal threads assigned to obtaining nutrition (rather than, say, those involved in reproduction) secrete digestive enzymes (exozymes) that break down organic matter in the surrounding environment into forms the cells can absorb.

So fungi first “digest then ingest.” And just how they do that determines whether a given species plays the good neighbor within its community of fellow beings or takes to a heinous life of crime. So to speak.

Back in seventh-grade science, you probably learned about the essential role fungi play as decomposers of dead leaves and such in forested ecosystems and elsewhere. Absolutely correct. The mushroom that seems to pop up overnight on the lawn after a rainy day or two — and is gone within a week — actually constitutes only a small fraction of the whole organism. Spreading out yards in all directions from the toadstool’s stem (or stipe) is a complex network of interconnecting hyphae that actively pull nutrients from the soil and litter throughout the year.

Mycologist (“myc-“ means fungus in bio-speak) Paul Stamets has observed that a single cubic inch of healthy forest soil contains more than 8 miles of hyphal threads. Although individual hyphae are difficult to see with the unaided eye, they typically mass together to form readily visible (usually white) strands called mycelia.

But beyond their recycling duties, fungi play an even more fundamental role in the life of field and forest. More than 90 percent of all plant species depend on hyphal coatings around their rootlets to obtain water and nutrients from the surrounding soil. This intimate symbiotic relationship between plant rootlets and fungal hyphae is referred to as a mycorrhiza.

Many a junior high science fair project has demonstrated that the seedlings of all sorts of plants grow poorly in fungicide-treated soil, leaving only their naked roots to do a sorry job of extracting nutrients from their de-fungused Dixie Cups.

But why work so hard mining nutrients from hard scrabble soils and rotting litter when you’re surrounded by eminently digestible sacs of food that happen to be still alive?

The largest living organism in the planet is a 2,400-year-old (at a minimum) honey mushroom (Armillaria ostoyae) found in eastern Oregon’s Malheur National Forest. Known as the “humungous fungus,” it covers 2,385 acres — the size of 1,804 football fields — extending 3.5 miles across and three feet into the forest floor.

In 1998, Catherine Parks of the Northwest Pacific Research Station had been trying to understand why so many Douglas firs and western hemlocks in the region were dying. She wasn’t really surprised to find the trees’ roots and trunks harbored dense growths of honey mushroom mycelia since the species is a known parasite of conifers.

But when she found that samples of the fungus collected throughout the area were genetically identical, it became clear that the entire massive aggregation was the largest individual organism ever discovered. This did generate a few headlines.

Then again, because of fungal cells’ biochemical similarity to animal cells, they are attacked by much the same types of bacteria as we are and most of our antibiotics have been derived from defensive compounds fungi have evolved over their 1 billion years of doing business.

Some 120,000 fungal species have been identified to date. But that may represent just 3 percent-8 percent of the world’s actual diversity. A 2017 report in the prestigious American Society for Microbiology suggests a best guess estimate of between 2.2 million and 3.8 million species of fungi.

And finally, just for the record, it turns out that portobello and the common white (button) mushrooms we all have in the fridge are the same species at different stages of development.