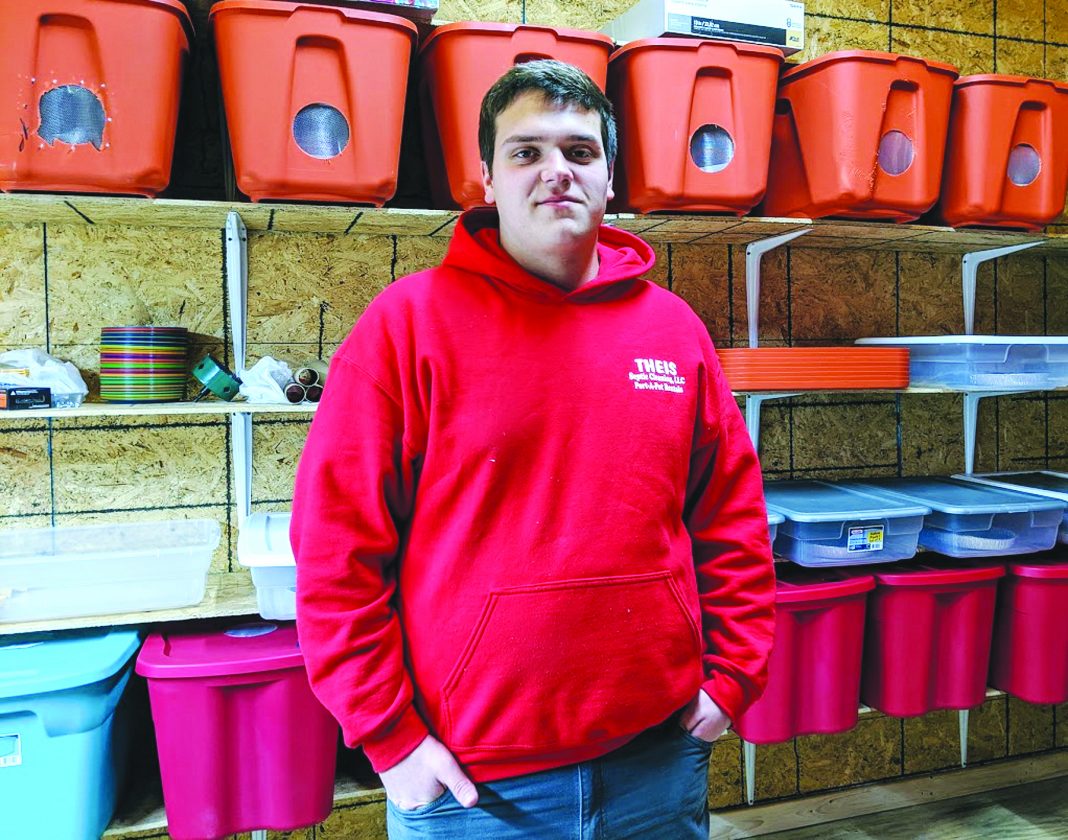 Whether you’re a reptile or a human, Eli Theis hopes you’ll be crunching on crickets in the near future.

Specifically, the crickets he raises at his new business — ET Cricket Farms.

Theis, a 20-year-old Tiffin University senior, sold his first 3,000 crickets in January, and he’ll have a steady supply from now on.

Theis is studying for a dual major in marketing and managerial studies, and he said he was looking for internships for both majors.

“I’ve always grown up on a farm and I didn’t know if I’d want to work a desk job,” he said.

And then he got an idea as he was talking to associate professor of marketing Danielle Foster.

“During the last semester of my junior year, she was talking about doing a business plan for a company in Bucharest that was starting a cricket farm,” he said.

So he investigated and found out nobody else in the area is raising crickets.

“I thought it was a good business to start,” he said. “There wasn’t too much money to invest in it and I got to build my own barn. It’s a good learning experience.”

Theis bought his first batch of crickets in November after he and a cousin, Aaron Russell, built the new cricket barn in late summer and fall on his parents’ farm, Chuck and Laura Theis, 2729 E. US 224.

He bought red and gray plastic totes and modified them by cutting holes and adding screens as air vents.

Inside each tote, he placed cardboard egg cartons, which create homes for the crickets as they grow up. On top is food, water and a plate of soil where they lay their eggs.

Crickets live for eight weeks, he said, spending the last two weeks of their lives breeding and laying eggs to create the next generation. The eggs hatch and grow into pinheads that look much like ants, and they continue to develop into small crickets.

The cricket room is kept at 92 degrees, which Theis said is the optimal temperature for encouraging crickets to breed.

They aren’t the species of black crickets that chirp outside — or inside — on summer nights. They’re banded crickets, a species that reptile and chicken owners prefer that also are made into human food.

Using his first crickets as breeding stock, Theis had his first collection of tiny cricket eggs. When they hatched and grew to adulthood — which takes about six weeks – he made his first sale Jan. 6.

“I didn’t want to be selling all those (first ones),” he said. “I wanted to make sure I had enough eggs to continue on.”

Each active tote contains about 1,000 crickets and other totes contain newly-hatched “pinheads.”

“There’s really no way to count them,” he said, referring to a tote in the barn he opened for taking photos. “In a week or two you’ll be able to see them better to get an idea of how many’s in there.”

Theis said he was surprised by how fast the crickets reproduce. He though the first batch he bought would turn into 10,000 crickets.

“In reality, they turned into 20-some thousand,” he said.

Right now, he has about 15,000 crickets, and they only live for eight weeks.

“I was thinking of freezing some for (fishing) bait,” he said.

Theis said his first four customers found him after his mom posted on Facebook about her son’s new business.

Now that the crickets are established, he said he’ll be turning his attention to marketing. He has a logo, and he’ll be getting business cards printed, creating a website and getting social media in place.

“Crickets and school have been taking up most of my time,” he said.

He also plans to attend reptile shows as a vendor in Toledo and Columbus to advertise.

He plans to continue the business as a side job for a year or two, and if it’s growing, he might consider it as full-time work.

The main advantage to buying crickets locally as pet food is the cost savings on shipping and making sure the crickets are alive when they arrive, he said. A batch of 2,000 crickets cost $60 if the customer picks them up at the farm.

“And they’re sure to be alive,” he said.

He said people buy crickets in various sizes, depending on the size of their pets or livestock, so he has a choice of small, medium and large.

However, as the business expands, Theis said he plans to offer shipping as well. And he might expand later into other types of reptile food he’s been asked about.

There’s also a market for cricket frass — or excrement — which is good as garden fertilizer.

In the long run, however, Theis is considering raising crickets for human consumption.

He’s been researching their many uses in human food. For example, he said cricket flour is a high-protein version of baking flour.

They also are popular snack foods in some segments of the population.

“They taste kind of like sunflower seeds,” he said.

He would like to process and package them into high-protein snacks with flavors such as barbecue, ranch, dill pickle, hot and spicy, buffalo ranch, and even chocolate dipped.

“My brother wants to take a test batch of a couple hundred crickets and glaze them on a barbecue,” he said. “You can also make them into protein bars. There’s tons of things you can do with crickets.”

He said he’s seen people add cricket protein to milkshakes and sprinkle it on salads.

“It’s a great source of protein at a cheap price,” he said. “They’re easier to raise and healthier than meat.”

Theis said he expects to find many more people eating cricket products within the next 10 years.

For more information on purchasing crickets, call Theis at (567) 230-2605, and watch for the launch of his website, ET Cricket Farms.