Living in the lofts: Increasingly, people choosing to dwell in downtown Tiffin 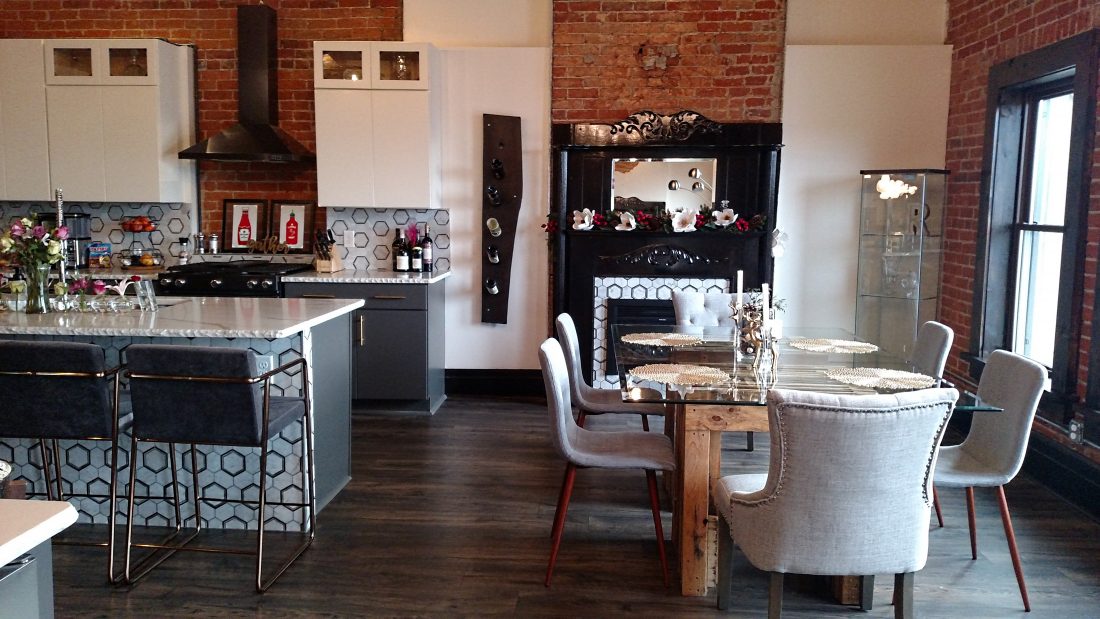 PHOTOS BY VICKI JOHNSON Several views of the interior of Weston Reinbolt and Suzie Reineke’s residence in Kebolt Lofts.

As more and more businesses have chosen to locate in downtown Tiffin — especially during the past five years — the downtown area has experienced a revitalization.

The increased business activity — shopping, restaurants and other establishments — and the interest of building owners in renovating exteriors has led to a burgeoning interest in living downtown.

Tyler Shuff, of Shuff Consulting, said eight apartments at the Laird Arcade, which he oversees, are filled.

“The Laird is at 100-percent occupancy, and I have a waiting list,” he said. “If I had another 20 or 30 units, I could probably have them rented in a week. It’s just a completely different ballgame from what it was 10 years ago.”

Shuff said he lived on Madison Street before he bought his house in another part of town, and he said there wasn’t much activity downtown.

“I kind of got to see when it was a ghost town and to see it transition into what it is today,” he said.

In turn, more business and activity downtown has drawn people who want to live there because there are places to shop and restaurants and places for recreation.

“We’re getting a wide spectrum as far as spaces go,” he said.

Apartment living downtown seems to appeal most to young professionals and empty nesters. He said older people and younger people are realizing they don’t need a large house to live in, with yards that need mowing and raking.

“There’s no everyday headaches of maintaining a large home,” he said.

“We’re going to keep our foot on the gas pedal,” he said. “It’s exciting to see what’s happened in the last five years. I’m looking forward to the next five. It’s almost like having little kids and watching them grow and expand and get bigger.”

Shuff said his goal is to see all the storefronts occupied and thriving.

Another group that sees potential in downtown living is Tiffin Capital Investments, a group of contractors that is renovating 33 Court St. into Court Street Lofts.

Kip Kieffer, one member of the group, said the building is to have five upscale loft apartments and a commercial space. A new art gallery is to open in the commercial space around April 1.

Two of the apartments are completed and already rented. One is an efficiency apartment being used by Kieffer’s daughter, Cortney, who is going to manage the building. The other is rented by a retired man.

He said the other three should be completed by early summer. One is a two-bedroom apartment and the other two have one bedroom each.

“It just seems like it’s the right time,” Kieffer said.

The businesses offer places to shop and eat, he said.

“I think the mayor has a lot to do with it. He’s very good at generating businesses,” he said. “So it’s just generating excitement downtown, trying to keep the younger generation here in Tiffin as opposed to going off to another city and finding a job.”

“The downtown façade grant money is great,” Kieffer said. “We used that. That was another big boon for downtown.”

In the future, Kieffer said, the group may renovate more apartments downtown.

“It takes a lot of money to bring one back to life, so you have to buy them right,” he said.

Other investors in downtown living are Weston Reinbolt and Suzie Reineke, who own Kebolt Lofts, which is renovating eight upscale loft apartments at 27 S. Washington St. across the street from The Ritz Theatre.

The couple lives in a double unit and are renovating seven more spaces.

In addition, Reinhbolt said Kebolt Lofts has another eight units down the street and own spaces for more.

Reinbolt said he and his wife lived in a house before moving downtown.

“We had a house with a yard and a lot of upkeep,” he said. “And we got tired of it and decided to do something different.”

He said they enjoyed “flipping projects,” or buying a house and then remodeling it for later sale.

“We bought foreclosures, and we thought we’d add a downtown business,” he said. “So we gave it a shot.”

They’ve completed their own apartment and another, which is rented by Deidre Hassinger. She lives there with her 16-year-old son, Sawyer Herdlick. She said they’ll find a place for her 18-year-old daughter to sleep when she’s home.

“It’s always been my dream to live in a loft,” she said. “I love the exposed brick and I just fell in love with the place.”

Hassinger said she previously lived in the country and found herself spending a lot of time driving into town.

“It thought it was time for a change,” she said. “Now I wake up every morning and love where I am.

“We just moved in in January, so I haven’t had the full benefit of the farmers markets and just getting out and walking around.”

But she’s enjoying being close to downtown food.

“We just walk down to Reino’s or Jolly’s and grab some supper and bring it home,” she said. “If you want to, you can go out and have a drink and you can walk home.”

She’s looking forward to the farmers markets being outside her front door, and attending events across the street.

“The Ritz Theatre is right here,” she said.

Out her back door, Hassinger said, she’s looking forward to sitting on the back deck reading a book and looking up to see the view of the Sandusky River.

She said downtown leaders have done a great job of drawing businesses.

“There’s a different vibe downtown, I think,” she said.

Reinbolt said Hassinger isn’t the only person who thinks so. He and Reineke have a waiting list of people who want to move downtown.

“People just started coming up to us and asking,” he said. “We have deposits on most of those.”

Reinbolt said he isn’t surprised by the growing interest in living downtown.

“There’s really not that many places to live,” he said. “The downtown is getting busier and busier. It’s easy to walk out your front door and go eat somewhere.”

He thinks the trend will continue.

“We have a lot of different organizations working on this,” Reinbolt said. Some of them are TSEP, Seneca Regional Chamber of Commerce & Visitor Services, Tiffin City Council, Seneca County commissioners and other organizations.

“Everybody seems to work together really well and everybody’s keeping it all moving,” he said. “It takes a lot of people.”

Reinbolt said he and Reineke never thought they’d be living in downtown Tiffin.

“Absolutely not,” he said. “We had no idea how it would be. It’s taken off and we’ve had a lot of fun with it.”

He said they might look into further projects in the future.

“For now, we’re just trying to get caught up with what we have,” he said.

“He was a Heidelberg student and he’s been following the momentum of what’s happening in Tiffin,” Shuff said. “They’re going to be some really nice lofts and condos. Looking at some of the past projects he’s done, it’ll be top notch.”

Hernando said during a phone call from his home in Miami, Florida, that his first contact with Tiffin was a student playing football at Heidelberg University. But through the years, he kept in contact with the city and the people who made him feel at home for the four years he lived in town.

He’s planning to build condominiums, apartments and an incubator space where new businesses can share office space so they have few expenses.

Hernando’s plans also include a downtown riverwalk along the Sandusky River.

He said he is joining a group of visionaries who seek great things for downtown Tiffin.