A former Heidelberg University student who says he fell in love with Tiffin during his time in town is envisioning a plan for adding a river walk, housing and a technology business incubator to downtown.

The Kear’s Family property is secured under a purchase and sale contract, but has not closed or been purchased yet.

When Developer Eduardo Hernando first proposed his ideas in mid-August, Hernando outlined his vision for the two former city lots, which included condominiums and apartments; a hotel with lobby and bar; conference space for events; and a rooftop bar and restaurant.

That part of the project would be located on Lot 4.

Apartments and creative lofts would be built in Lot 6 across the Sandusky River from Kiwanis Manor.

“I presented the uses before the council because they needed to know what I planned to use the property for in advance of city approving the sale to me,” Hernando said. “They voted 6-0 in favor of the sale of both lot 4 and lot 6 based on the current expectations.”

That was last fall.

The expanded project proposal includes a river walk for walking and jogging that stretches the length of the development area.

Instead of building close to the river, Hernando said he sees more value in protecting that area as a public space. He said he envisions families walking along the river walk. The river is on one side and other side offers shops and cafes. Sometimes there would be live music, and there are spaces set aside for displaying artwork.

“It all goes back to the Tiffin strategic development plan published in 2016,” Hernando said. “My plans and vision came from that plan and is feasible for Tiffin’s future.”

He said he David Zak, president and CEO of Tiffin-Seneca Economic Partnership, showed him the plan two years ago.

“When I saw this plan I was fascinated by it,” Hernando said. “I think Tiffin is really ready now for something really special.”

Hernando credits Tiffin’s leaders with creating the plan for a new future for downtown.

“These are the visionaries,” he said. “The people who have been quarterbacking this progress are the ones who saw the future in Tiffin and invested in the strategic planning process.

“I want to make clear I’m just joining this team,” he said. “I want to contribute my talents. It’s all of us together that have gotten us to the point of where we are today.”

In addition to the river walk, another new portion of the project — to be built on the Kears Speed Shop lot — is Tiffin Technology Development Center, a shared office space where beginning online and e-commerce businesses could start up without costly overhead, Hernando said.

“We would provide the highest bandwidth available,” he said. “This would create an incubator of positive energy, of excitement for the future, of networking.”

A marketing campaign would go along with the technology center with an aim to make Tiffin “the place” for young people to start an e-business.

“The future of work is remote,” he said. “We can promote Tiffin as a place to stay and live while doing business (online) anywhere.”

He said technology-related businesses are the future and he wants to draw and keep young professionals in Tiffin by providing a space they can use.

Retaining youth in Tiffin is one of his goals.

To that end, Hernando has involved several students from Heidelberg and Tiffin University in the planning stages. As he goes through the project development process, he has invited students who want to learn entrepreneurial skills to accompany him to meetings.

“I felt like why not ask a few students that are interested in being mentored, or shadowing this project along the way,” he said. “This a very long legal process, so there’s a lot to learn.”

Hernando meets frequently with students as he goes through the steps to create the project he envisions. For example, he had to learn about Tiffin’s zoning regulations, so he took students with him when he talked to Matt Watson at City Hall.

One of the students, Mallory Paul, a Tiffin native and student at Heidelberg, said it’s interesting learning all the steps in the process. And Jeffrey Baker, a Heidelberg student, said he appreciates the experience and he’s learned a lot of about zoning and the various areas of Tiffin.

“They’re learning and walking through this path as if they were doing it,” he said.

He said he hopes the young people will someday follow through with their own projects, and taking them through the steps helps them learn first-hand things it took him 20 years to learn on his own.

“All that is contributing to where downtown is today,” he said. “The lofts are amazing, beautiful, and they bring people downtown.”

He said his development would not compete with those apartments, but would fill another need not being met, and draw more people to downtown.

In preparation for his proposal, Hernando said he studied Tiffin’s housing situation.

“But there’s a phase before that that’s missing in Tiffin right now,” he said. “In the case of Tiffin in general, Tiffin is lacking in housing opportunities at all different levels.”

As an example, he said Tiffin has an overall aging population. Those older people who once loved having a house, a yard and a garden now might no longer be interested in maintaining a property in that manner.

“They don’t want to live in a huge house anymore,” he said. “If they sell their home and move into an apartment they can manage on their own, or if they’re traveling, they can close the door when they leave and not come back to an unkept property.”

In turn, he said the houses they sell would be available to be purchased by young families who need space for children and are interested in gardening and doing yardwork.

Along with condos, Hernando said there’s a need for rental apartments for young professionals.

“The demand I believe is really there,” he said. “People could life downtown in an affordable apartment and go nearby to their workspace.”

In some cases, he said people who work in Tiffin live in Findlay or other areas because not enough housing is available.

Hernando said the next step is to set up sample floor plans and units and to open a sales office by early fall.

“The commitment at this point is to verify the city and the people want to live downtown,” he said.

He said 50-60 condos must be pre-sold before financing would be available for construction.

“People can come in and take a look at the floor plan and choose a unit,” he said. “We have to prove those units would sell once the building is built.”

He said he already has several people interested in purchasing units.

“As soon as the project was announced, I had a half a dozen people,” he said.

Hernando said he chose Tiffin for this development because he loves the town.

During his years of learning and playing football at Heidelberg, he said several people in town were kind to a young person so far from his home in Miami, Florida. He stayed in touch with them through the years and about three years ago, he said, he began to take note of changes in Tiffin.

“It was just an overwhelmingly great feeling that I had there,” he said.

“I’m humbled by it because this is a great honor to be doing this project,” he said. “This is the gateway of Tiffin and that’s how important it is.

“It’s a great responsibility that I accept, and I believe it will be a great project the whole, entire community can be proud of,” he said. 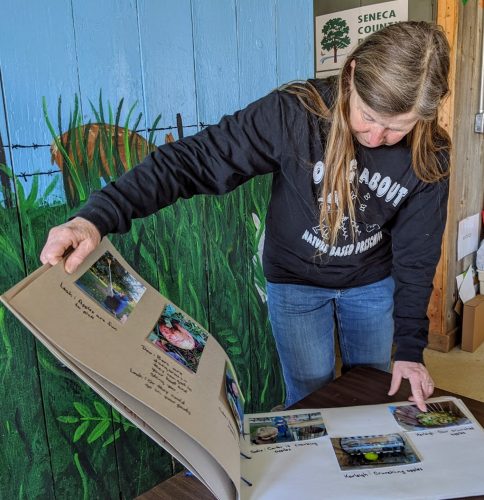