Points of view: Wind turbines — among tallest structures in Ohio — would be visible from most of county 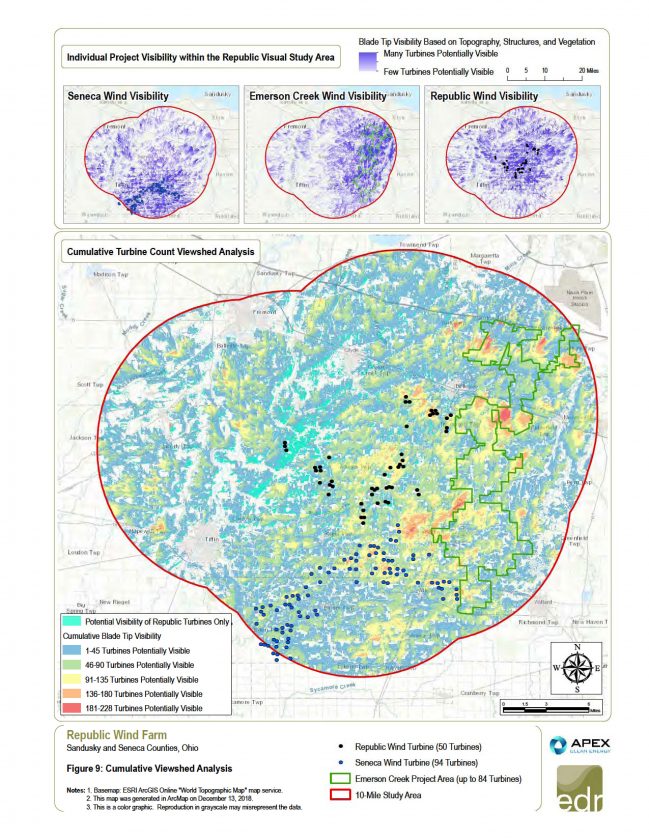 IMAGES BY APEX ENERGY This map indicates how many turbines from the proposed Republic Wind, Seneca Wind and Emerson Creek projects would be visible from within 10 miles of wind farm sites.

Opinions vary widely on whether wind farms are a good fit for Seneca County.

No matter which side an individual chooses — or no side at all — if wind turbines are erected in the county, some would be 652 feet tall and others would be 500-plus feet tall, making the local wind turbines the tallest in Ohio and the second-tallest in the United States.

Two proposed wind farm projects are in the works in Seneca County — Seneca Wind Farm and Republic Wind Farm. Plans have changed for a third wind farm, Emerson Creek, which no longer plans turbines in Seneca County but is proposed for Huron and Erie counties along the eastern edge of Seneca.

If approved, the proposed projects would place wind turbines in the eastern part of the county designed to generate electricity using wind power. Each of them is in a different stage of requesting a certificate from the Ohio Power Siting Board that would allow construction to begin.

To put turbine height in perspective, consider these comparisons.

The well-known Perry’s Victory and International Peace Memorial on Put-in-Bay is 352 feet tall, a little more than height a turbine.

The tallest building in Columbus is 624 feet tall.

Turbines in Van Wert and the western part of Ohio are 400-some feet tall.

Because of the height of the turbines, the “viewshed” — or the area from which the turbines could be seen — would include most of the county and parts of other counties (see map).

The accompanying map from APEX has a color-coded legend that shows the numbers of turbines that would be seen from a 10-mile area around the wind farm sites.

One example of large numbers of turbines being see is at Sorrowful Mother Shrine, 4106 SR 269, Bellevue, where it’s estimate people would be able to see turbines from both projects totaling more than 200, said Greg Smith, a Bloom Township resident and spokesman for Seneca Anti-Wind Union.

As another example, Smith said people in Bascom would be able to see between 136 and 180.

Numbers of turbines that may be seen depend on the flatness of the ground and objects that might limit visibility.

Whether it’s seen as positive or negative, the viewshed is one aspect that makes the wind farms a countywide issue.

Other countywide wind-related issues are economic development and financial considerations (discussed in an upcoming story).

And a third viewpoint is a positive one in which people envision turbines blades turning and adding electricity to the country’s power grid.

No matter how individuals see them, the look of rural Seneca County would change, particularly on the eastern side.

“Some people complain about the way turbines look, while others find them beautiful,” she said. “Ultimately, both are subjective claims, but communities that host wind farms have experienced increases in tourism because of the renewable facilities.”

She said there is a form of tourism based around looking at wind turbines, and some people travel to wind farms around the country to enjoy the view and take scenic pictures.

“Some people have said they do not like the look of the turbines,” he said. “For some, the project represents change, which takes getting used to for any community. However, wind farms are a common sight in rural areas throughout the world and people live happily and healthily among them.”

“We want to make sure you and I and future generations have that power,” she said. “This is one way Ohio is addressing that.”

Stacy said she looks at wind farms as Seneca County doing its part to meet that goal.

One of the landowners and farmers with a lease is Gary Baldosser, who sees wind turbines as a need for producing electricity everyone needs.

“Nuclear plants are not receiving their operation license renewals,” he said. “Davis Besse is closing down. Where is that deficit going to be made up?”

“Our society is more and more dependent on electricity,” Baldosser said. “Where are we going to generate the power for that need? The need is greater is highly populated areas than it is in areas with low population density.”

Baldosser said electricity can be moved only so far without losing effiiciency.

“The further its moved, the more loss there is and the greater the cost,” he said.

For example, he said running a 300-foot extension cord to the end of a driveway to plug in Christmas lights means the electricity at the end of that cord is less efficient that plugging directly into an outlet.

“You have a loss with moving that electricity 300 feet from the source to where you need it,” he said.

On a larger scale, he said, that’s how the nation’s electric grid system works.

Baldosser said he uses an analogy to help understand the grid system. He said he gathered his information from electric companies as he researched the wind farm idea.

“We have 55-gallon drums of electricity sitting in various parts of the county that communities use to get their power from,” he said.

In his example, if Chicago has a heat wave and everybody turns up their air conditioners, Toledo and Cleveland send some of their power to Chicago to make up the greater need.

In turn, Cleveland gets some power from New York so everybody continues to have a reliable supply of power.

However, the farther the electricity is moved, the less efficient it is.

Baldosser said that’s where the wind turbines strength comes in. Electricity generated would go into the eastern grid and local power needs are drawn from that grid, “but we’re not going to plug into the bottom of the grid.”

While nuclear plants are either operating or not, Baldosser said wind turbines can be shut down and started much more easily.

“The operators can bring turbines online or take them offline,” he said. “If we get to the point where they’re not needed, the drums are full, they can be shut down for maintenance. Their efficiency is they are able to go quickly on and off line.”

If Toledo has a heat wave and more power is needed, electricity from the turbines can help fill that need.

“If all of a sudden the demand is greater, it’s harder to ramp up a coal or gas-fired plant than it is to put more turbines online,” he said. “If the drum’s running over, it’s wasted. If it runs dry, somebody has a brown out.”

On the other hand, turbines would change the view.

“We’re setting ourselves up to ruin our scenic landscapes in the county,” Smith said. “Some people think they’re sleek and cool. I, personally, don’t see anything appealing about them at all.”

Steve Shuff, an Eden Township resident, said the blades are “as long as a football field, or close to it.”

Speaking as a private citizen and not as a common pleas court judge, Shuff said “the viewshed will be unbelievable all over our rural landscape. You’re not going to see the rural landscape anymore unless you like to see 652-foot turbines.”

He said he’s working for the best interests of the county.

“It would be easier for me to not do anything,” Shuff said. “But I think these will ruin the rural landscape of our county.

“I believe in the future of Seneca County and I believe this is one of the worst things that can happen to Seneca County,” Shuff said. “Industrial wind turbines are not what we need in our county and I think in the long run they will be very detrimental to our county.

“My vested interest is not money,” Shuff said. “I’m in this for my children and grandchildren. And for my neighbors. I don’t want to sit on my patio and see wind turbines instead of God’s beautiful earth.”

“Nobody is against alternative energy, right,” Kerschner said. “What it needs to be is in much less densely populated areas than Seneca County.”

He said Seneca County is one of the most populated areas that has been proposed for wind farms.

“Those are islands within the 56,000 acres,” he said. “The rest of the people are unwilling and unknowing and didn’t sign leases.”

Within that area, Smith said, several turbines in the Seneca Wind plans do not meet state-required setbacks of 1,330 feet from neighboring property lines. He said a proposal would change the setback requirements so they would be measured from a house instead of from a property line, and SAWU is against the change.

Smith said Seneca Wind is requesting waivers from property owners who have not signed easements, offering $500 a year to owners who allow turbines to be placed within the setback area.

Overall, several opponents were concerned there would be more wind projects in the future, while people in favor of wind projects look forward to their expansion and the economic benefits they bring with them.