Dinosaurs live! (sort of): And they roam the earth — and sky — today as birds, which scientists say are their descendants 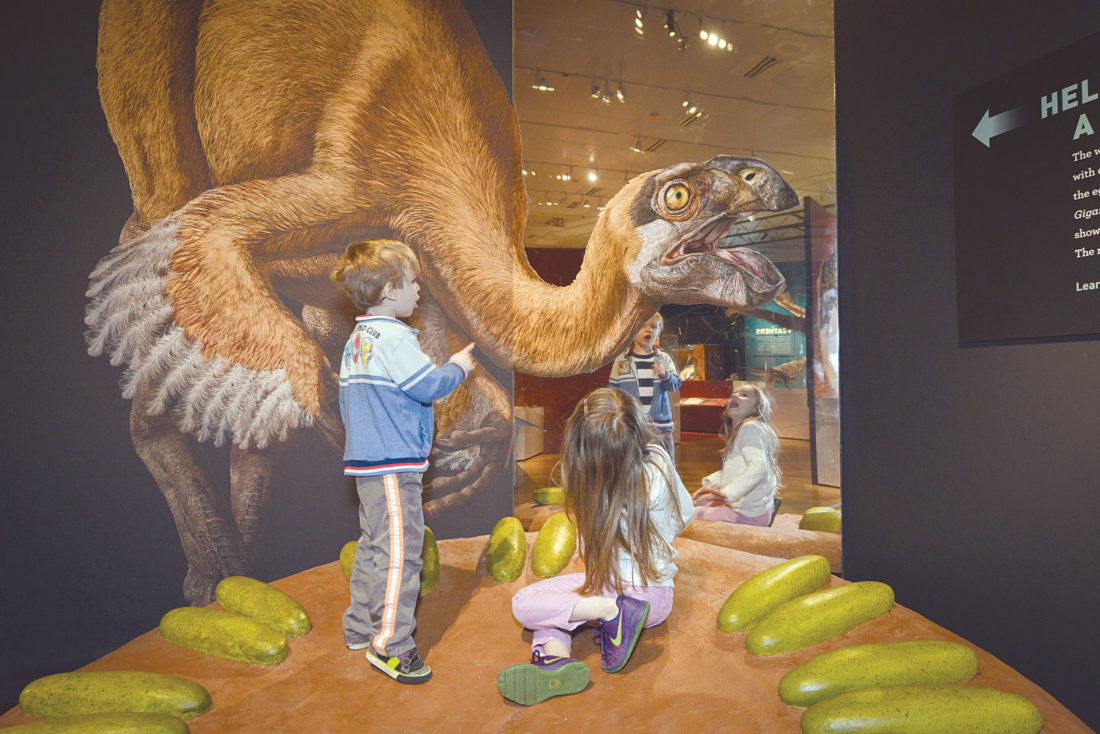 PHOTOS SUBMITTED Exhibition visitors at COSI get up close and personal with a climbable, full-scale model of a nest with 20 eggs discovered in China, likely laid by one of the largest oviraptorosaurs ever found, Gigantoraptor.

COLUMBUS — If a mid-winter road trip sounds like a good way to beat cabin fever, COSI in Columbus has a dinosaur exhibit the whole family might enjoy.

Among the displays are a full-size cast skeleton of Tyrannosaurus rex, a 60-foot-long metallic model of the long-necked apatosaurus and interactive exhibits showcasing the latest scientific findings about dinosaurs highlight a new COSI gallery.

The 13,000-square-foot gallery, a joint project between the Center of Science and Industry in Columbus and the American Museum of Natural History, opened in the fall.

Housed in a renovated space at COSI, the gallery reveals the evolution of dinosaur biology, highlighting ongoing research by paleontologists. Scientists now know dinosaurs never fully vanished from Earth, the partners said in a news release. Modern birds are their living descendants, classified along with their extinct relatives in the evolutionary group Dinosauria.

The exhibit features never-before-seen elements including interactive experiences and specimens from world-class collections. 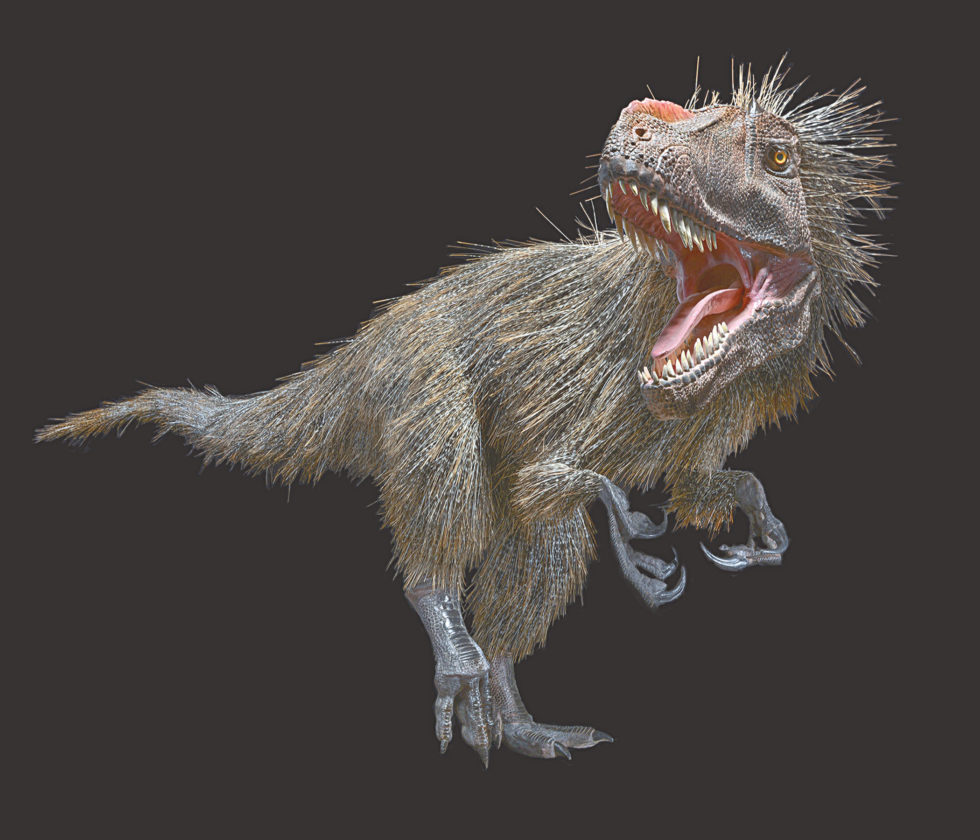 An illustration of Yutyrannus huali, which means “beautiful feathered tyran.” It is believed to have weighed 1.5 tons and was a fearsome predator like its relative Tyrannosaurus rex. It also sported a shaggy coat of filaments called “proto-feathers.” It was discovered in northeastern China in 2012.

Visitors can see a 100 million-year-old fossilized Burmese amber — with an ancient feather sealed inside; an 8-foot-long titanosaur femur; a 6-foot-long mechanical T. rex model that walks in place, illustrating how bio-mechanical studies have helped paleontologists learn more about the typical speed and gait of a rampaging tyrannosaur.

The exhibit also showcases a 15-by-10-foot re-creation of the famous Davenport Ranch Trackway, displaying a collection of sauropod and theropod dinosaur prints, which was unearthed in Texas by scientists in the 1930s and 1940s, as well as a three-horned triceratops to the dome-headed pachycelphalosaurus, accompanied by details from the latest theories about how peculiar features including horns, fills, crests and domes were used in life.

There’s also a cast of a T. rex furcula, or wishbone, once thought to be unique to birds but now known to be present in some bipedal, meat-eating dinosaurs.

And kids can enjoy a climbable, full-scale model of an oviraptor nest discovered in China, complete with 20 eggs.

“We are extremely excited about this unique partnership,” said Frederic Bertley, president and CEO of COSI. “COSI is expanding its fantastic offerings as a state-of-the-art science center to now include natural history, and we are doing it in partnership with one of the world’s leading natural history museums — New York City’s American Museum of Natural History. 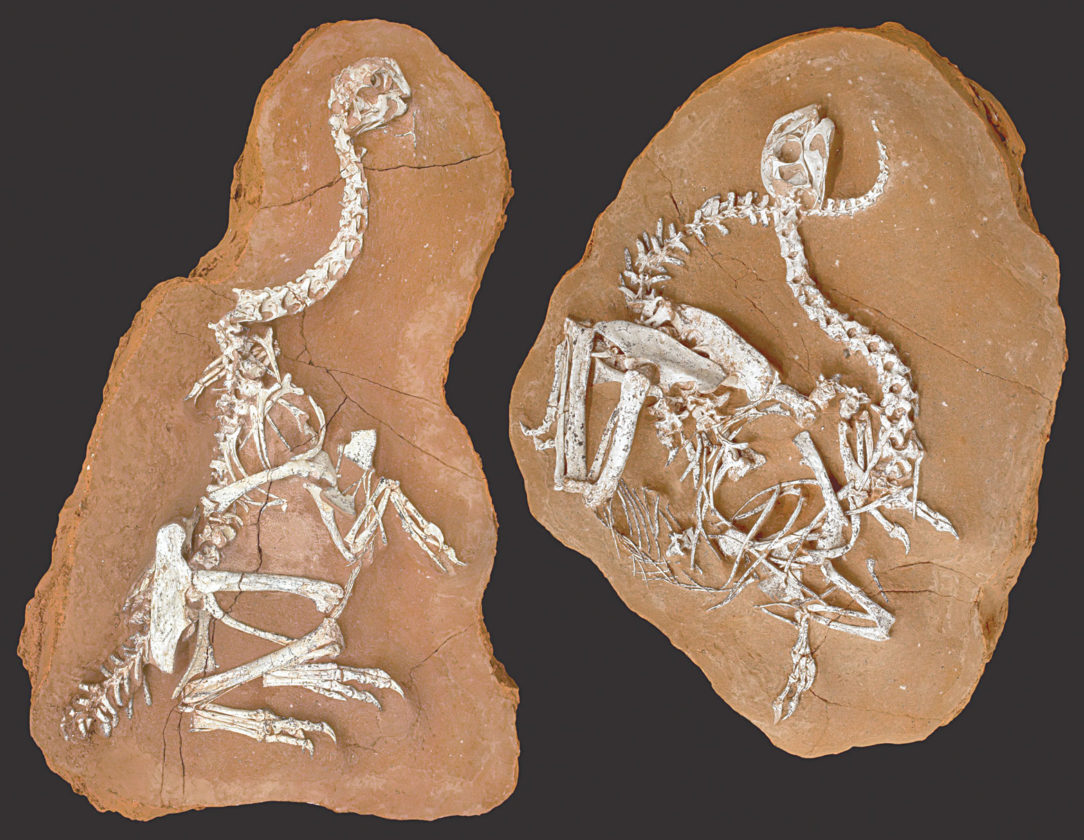 These Khaan mckennai dinosaurs are similar to birds in many ways. While these animals are nearly identical, scientists suspect the specimen on the left is a male, based on the presence of large structures beneath its tail that have a triangular, spearheaded shape. Those structures are smaller in the animal on the right, and lack the triangular, or “chevron,” shape, suggesting the larger structures could have supported the muscles used in a tail-feather display, much like those still put on by birds, including the sage grouse and peacock.

“The fact that we are opening with dinosaurs is a bonus, as dinosaurs appeal to visitors of all ages and backgrounds,” he said. “More than that, however, the addition of this … content within our walls positions COSI at the epicenter of the Columbus downtown growth, revitalization and cultural transformation as well as helps us further our commitment to enrich public understanding of science through this enhanced visitor experience.”

“We are delighted to bring the research of our scientists, the interpretive skills of our exhibition and education teams, and, of course, our world-renowned dinosaurs to audiences in Columbus through this unprecedented partnership with COSI,” said Ellen V. Futter, president of the American Museum of Natural History. “This collaboration between a natural history museum and a science center offers a unique and powerful platform to further science education and science literacy at a time when they are more important than ever to our children, our nation and our world.”

The museum has established research, exhibition and educational collaborations around the world, but this is the first partnership of its kind with a science center, the news release states. It was made possible by a $5 million investment from the state of Ohio and a $2 million gift from Abigail and Leslie Wexner.

“The American Museum of Natural History is without question the best possible partner COSI could have in bringing the wonders of the natural world to this region,” said Leslie Wexner. “The debut of dinosaurs at COSI is another important step in the transformation of downtown Columbus made possible by $2 billion in private and public investment over the last 10 years.”

With an eye on growing COSI’s audience and enhancing Columbus’s downtown peninsula as a destination, civic and community leaders, the Columbus Downtown Development Corp. and the city of Columbus and the state of Ohio collaborated to deepen programming in the Scioto Mile region, the news release states. The partnership was one of the outcomes. 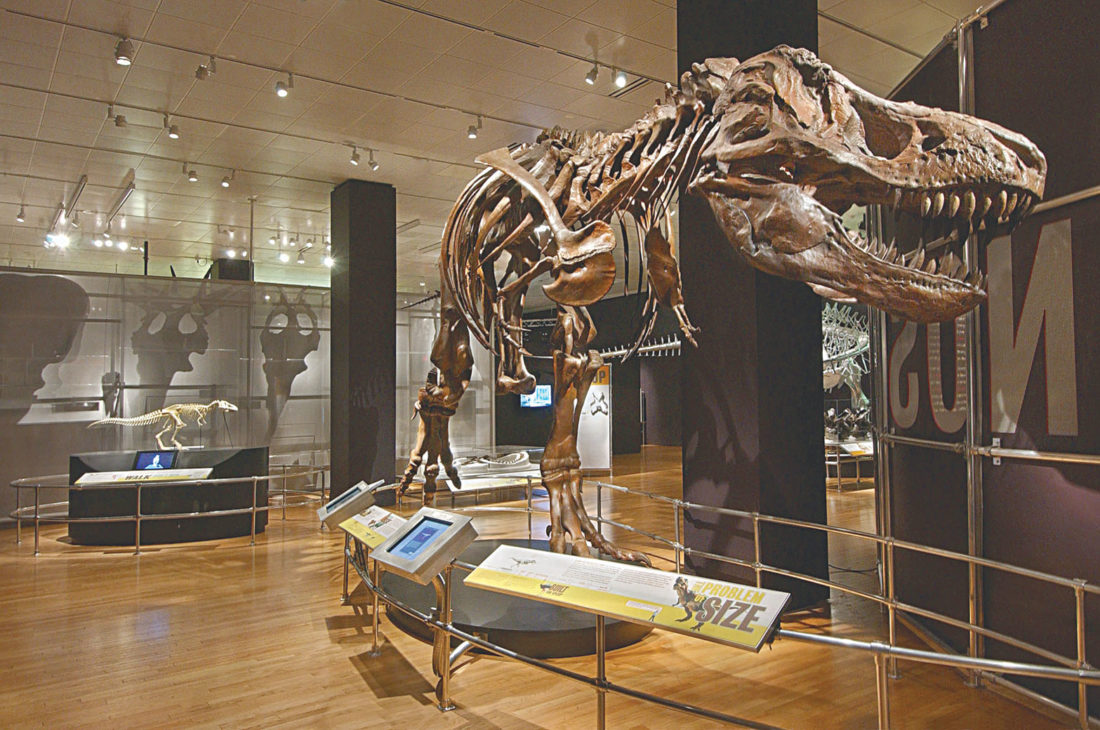 PHOTOS SUBMITTED The exhibit at COSI includes a full-size cast of a Tyrannosaurus rex fossil skeleton from the collection of the American Museum of Natural History.

Columbus Mayor Andrew J. Ginther said COSI draws more than 660,000 visitors a year to the Scioto Peninsula, and the partnership is expected to boost visitor frequency while drawing visitors from farther away.

The adjacent American Museum of Natural History Special Exhibition Gallery, set to open in March, is to feature exhibitions on a rotating basis. The first is to be “Traveling the Silk Road: Ancient Pathway to the Modern World,” which showcases one of the greatest trading routes in human history, highlighting the migration of peoples from one land to another — a very modern-day topic. 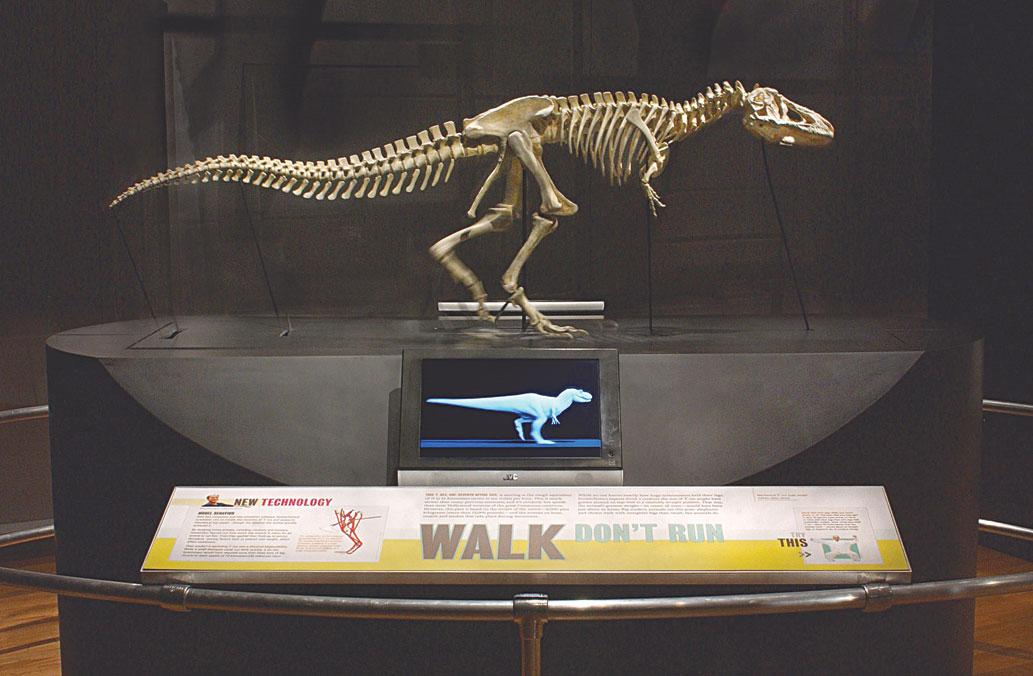