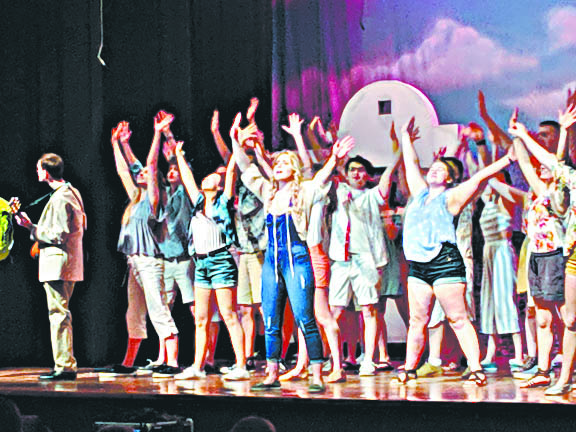 Columbian High School students are pictured during their dress rehearsal of the school’s production of the Broadway musical “Mamma Mia!”

Showtimes are 7:30 p.m. Friday and Saturday and March 29 and 30 in the school auditorium. Tickets cost $7 and are available at the door or may be reserved by calling the school office at (419) 447-6331 during regular school hours.

“Mamma Mia!” is a jukebox musical, based on the songs of ABBA. It includes such hits as “Super Trouper,” “Lay All Your Love on Me,” “Dancing Queen,” “Knowing Me, Knowing You,” “Take A Chance On Me,” “The Winner Takes It All” and the title track.

On the fictional Greek island of Kalokairi, 20-year-old Sophie (Lauren Buskirk) is preparing to marry her fiance, Sky (Sean Smothers). She wants her father to walk her down the aisle, but doesn’t know who he is. Sophie discovers her mother’s old diary and finds entries which describe dates with three men: Sam Carmichael (Jimmy Skidmore), Bill Austin (Aidan Huntington) and Harry Bright (Zachary Pool). Sophie believes one of these men is her father and, three months before her nuptials, sends each an invitation to her wedding.

The day before the wedding, her mother, Donna (Isabelle Lewis) begins receiving guests at her tavern. The first to arrive are her long-term best friends, Tanya (Jillian Hall) and Rosie (Emma Melvin). The three used to make up a girl group called “Donna and the Dynamos.” Also arriving are Sophie’s friends, Ali (Anna Stephey) and Lisa (Kirsten Egbert). They are all welcomed by Sky’s buddies and staff members Pepper (Alex Taylor) and Eddie (Evan McIntyre).

Later that day, Sophie’s three possible fathers arrive, and Sophie convinces them not to tell Donna that she invited them. Sophie had hoped she would know her father the moment she saw him, but is now only confused. During Sophie’s party, she talks to all three “Dads,” and each one mistakenly thinks he is her father.

Directing the show is Michael Steyer, with Kimberly Ridge as musical director. Lindsey Stine is the assistant director and choreographer. Cory Ridge provides additional choreography, Candace Wingert is the costumer and Lonnie Fitch is technical director.