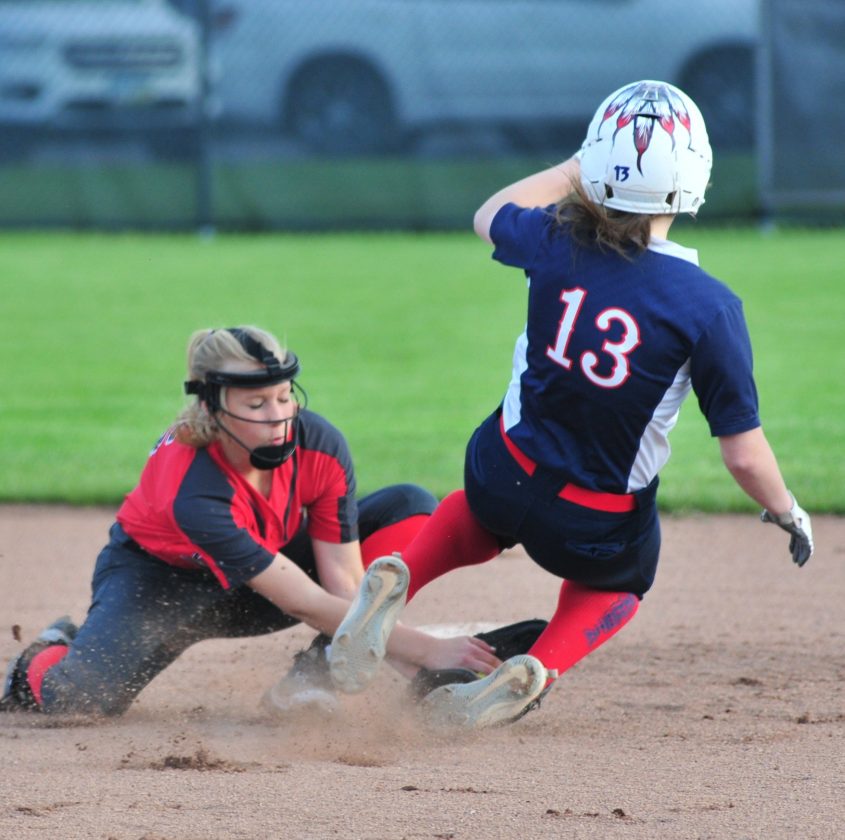 The Lakota starter — who was shut down for part of this season with injuries — had allowed the Chieftains just four hits and one walk in her start. She struck out three and — after she retired Bryanne Counts on a grounder to short — was one out away from sending Lakota to Friday’s finals with a 1-0 win.

But the Chieftains didn’t let her get that final out.

Instead, H-L’s Chelsey Depinet singled, stole second, and then went to third when Olivia Zender perfectly slapped a ball over the shortstop. Depinet went to third, and Zender raced to second.

And then it was up to Kenzie Coleman.

She popped to short each time.

“I just said a prayer before, and I was just like, ‘I just need to step up for my team, and get it done,'” Coleman said.

She did, ripping a ball that went beyond the reach of Lakota centerfielder Mekenzie Rathburn in deep center. Depinet and Zender scored, and Hopewell-Loudon walked off with a 2-1 win over the Raiders.

Coleman said she knew it was a hit when she made contact.

With the victory, the Chieftains (17-6) advance to Friday’s final back here in Oak Harbor. They will face Gibsonburg, which got past Old Fort in Tuesday’s first game, 11-6. Friday’s final is scheduled to begin at 5:30 p.m.

Hopewell-Loudon had some opportunities to break through against Claburn and the Raiders. Its best chance came in the bottom of of the second, when it loaded the bases without the benefit of a hit and one out.

But Claburn worked her way out of the jam, getting Hannah Brickner to pop up and Counts to strike out. Claburn also managed to pitch around a Chelsey Depinet double and a walk in the fifth.

Claburn practically dared the Chieftains to swing at pitches out of the strike zone. She frequently went to full counts against H-L, but only once did that result in a walk.

Lakota coach Troy Lewis said that was by design.

When the teams met in the regular season April 23, Lewis wanted to limit his pitcher a bit, and only have her throw about 60-70 pitches.

In that game, he had Claburn go right at the H-L hitters. The result was a 14-1 Chieftain win.

“Today, we knew she was fully healthy, and she could throw 150 pitches if she needed to,” Lewis said. “So we decided she was going to pitch around, maybe pitch from behind, and that’s exactly what she did.”

And while Claburn was giving the Chieftain hitters fits, H-L starter Macey Malagon was matching her. She faced the minimum through the first 3 1/3 innings, and limited the Raiders to two hits through the first four.

But Lakota took advantage of some miscues in the fifth.

Rathburn opened with a single, and then with one out, Amber Eubank grounded back to Malagon. Malagon attempted to get the lead runner at second, but her throw was wild, and Rathburn ended up on third and Eubank took second after the throw in from the outfield was wild.

Lauren Bennett then laid down a bunt, which allowed Rathburn to score. Bennett reached first on the play and Eubank took third, but Malagon recorded the next two outs to get out of the inning.

“Macey’s just all heart,” said Hopewell-Loudon coach Tony Malagon. “She has a lot of experience, she’s played some travel ball, and through the Rec ball back in Bascom, she’s always been that go-to (pitcher) on the mound. So I think she fell back on experience, and she’s been there before.”

Now, the Chieftains will be looking for a district title.

“We just want to play one game at a time and see where it brings us,” said H-L first baseman Chloe Malagon.

While Hopewell-Loudon’s offense struggled until late, Gibsonburg’s offense was rolling from the first pitch.

The first seven Golden Bear hitters had base hits in the first inning, and Gibsonburg sent 12 to the plate against Old Fort starter Savannah McCoy.

Coral Kocsis had a two-run single in the six-run burst, while Camren Krotzer had an RBI double.

“We were fortunate to get six runs early against a very good team,” said Gibsonburg coach Marty Brown. “Anytime you’re playing that kind of competition, you need to capitalize the best you can.”

And while the Gibsonburg offense was clicking, its defense also made some big plays. Pitcher Jasmine McNett started a pair of double plays on grounders back to the circle, and twice the Golden Bears threw out a runner at second base after a hit.

“We were on top of our game defensively, even though we had a couple errors,” Brown said. “The girls understand that if they want to go deep in this tournament, they’re gonna have to play better defense than they did throughout the year. And today, they did.”

McNett didn’t so much stop Old Fort’s offense as contain it. The Stockaders had 13 hits — four by Madison Guth — and Laini Gillett drove in four runs.

“We still hit the ball and we hit it hard, just didn’t hit the holes like they did in the first inning,” said Old Fort coach Jason Ward. “That’s a significant thing.”

But Gibsonburg was able to answer. Ashley Mendoza clubbed a two run homer in the third, and Mariana Alejandro drove in three runs. The Bears used a three-run eighth to go up 11-4.

McCoy hit a two-run double in the seventh for Old Fort.

Old Fort bowed out of the postseason at 10-9.